I have made candied ginger for a number of years. It lasts for quite a while stored in an airtight container and it’s amazing to use when I’m making any type of ginger cookie.

The recipe I have used before is the one from David Lebovitz here. It has worked out well, though I haven’t always taken his advice to cut the ginger as thinly as possible. I find I like it better cut a little thicker. 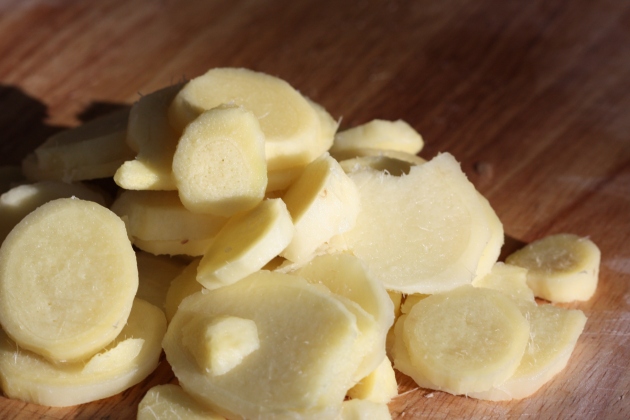 According to his recipe you need to use a 4 cups of sugar and water for each pound of ginger. This year I had 1.5 pounds of ginger so I used 6 cups each of water and sugar. Here is another good recipe if you want the ginger to be done faster, but as one reviewer commented, if you want the ginger flavour strong, take the time to boil all of the water off without dumping any away.

This year I followed the first recipe, but only boiled the ginger in water once. The ginger stayed very spicy. I also had to leave the house midpoint, so my husband took the boiling ginger off the burner and let it harden into a huge mass before I came back. It had been pretty much finished by this point, but on my return I had to re-liquify the whole thing before attempting to drain the ginger from the syrup. Not a lot of it drained. Mostly the “syrup” hardened and I placed the ginger pieces onto parchment paper carefully by hand (as it was still pretty hot). I didn’t bother putting the pieces into granulated sugar as the sugar already on the ginger pieces crystallized.

Perhaps I screwed up somewhere, but it still seems to have worked out well yet again. It’s not rocket science. 😉 Mmmm…ginger. 🙂